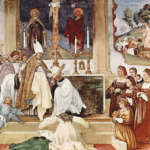 So Azure has a ‘serverless’ kubelet concept. In a nutshell we follow virtual-kubelet instructions  (except they were missing az provider register –namespace ‘Microsoft.ContainerInstance’, pull request sent).

What this does is schedule Pods (which have a special annotation) to a farm of servers which are willing to accept ‘foreign’ containers (Pods). This means your Kubernetes master delegates work to a shared Node. What this means for security, well, lets chat about that another day. But what it means for horizontal scale is Good Things(tm). We can now share the pool of many servers rather than the small number of virtual machines we have pressed into service as Nodes in our own K8s cluster.

So, when I run this:

It runs ‘somewhere’, a container floating in the universe with no specific host to call home. Where it lands, nobody knows, who its beside on that server, nobody knows.

Now, is this good enough for me with my Gitlab Runner CI?

In short, not really.

But, I think its a step in the right direction. I wonder if we will see a Google ‘raw container pool’ engine, given that Azure has ACI and AWS has Fargate?

A little snooping on the remote container in dmesg. Its interesting, there is the full boot sequence, then a large gap, then a line about my interface coming up:

We can see that the host is itself running on Microsoft HyperV (dmesg rats it out).

We can see we are vulnerable to some spectre + meltdown madness: