History of Hush: Fighting the Good Fight Since 1920 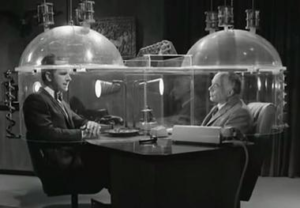 A couple of years ago I wrote (in shut up and take my money) of the kickstarter Hushme. It sought to deliver, with your Good Money and Bad Judgement, this beautiful device pictured below. Sure you would look idiotic using it, but, well, in 2020, masks have become more of a thing. So I decided to go back and check it out.

Checking out the Kickstarter page, I note that in October of 2020 (yes last month) they delivered. Good for them, I’m still waiting for my Mugsy. Ps, be sure to view the video at the bottom, the how-too-guide. There is no why-guide.

Now, you may not know this, but the Hush concept is what brought us Network Neutrality today. You see, in 1921 the Hush-A-Phone was invented. Basically a “phone booth for your handset”, it was placed over the mouth-piece of a candlestick era phone, the kind that 7 of the richest people in your city would have. You would keep this bad-boy in your vest pocket (along with your pocket watch and your hair pomade). When you had an urgent, private call to make, you would whip it out, slide it over the mouth piece, engage your dialing wand, and say something like “Mavis, Klondike 321 please”.

Now, this might seem silly, but, well, 100 years later the HushMe met its kickstarter goals, so clearly there is a non-zero percent of the population who will buy anything. This can’t be newsworthy, right?

Wrong. You see, the Hushphone manufacturer was to engage in a war with AT&T. You know, the company bigger than the US Government? At the time, AT&T was an unrepentent monopoly. This was designed right into the system. You could only rent your phone (not buy). It had to be supplied by AT&T. You could not connect anything to the Bell System other than what they supplied.

Once Ma Bell got word of the nearly 10’s of devices being sold by Hush-A-Phone, they parachuted in lawyers. Cease and desists were sent. The Hush-A-Phone company decided to tell AT&T to, well, something impolite in the slang of the time.

A hearing was called before the FCC. Engineers were brought in to talk of wild claims of voltage spikes caused by this muffler, possibly killing workers. Impressive stats were brought up about decibels and gain and harm.

Finally the FCC did what it does best. Fold to political pressure and ignore facts. In 1951 the FCC dismissed the case, but, kept it open for some reason for the next 7 years. In 1955 they ruled (against Hush-A-Phone), saying “The unrestricted use of the ‘Hush-A-Phone’ could result in a general deterioration of the quality of interstate and foreign telephone service. Accordingly, it is not an unjust and unreasonable practice upon the part of the defendants to prohibit its use in connection with their telephone services.“

So of course Hush-A-Phone went quietly into the night, right? Wrong. To court they went. And they won. In Hush-A-Corp v United States (they sued the FCC, not AT&T), the court over-ruled the FCC, and the good folks at Hush-A-Phone went on to… well, not much, turns out that a) no one wanted it, b) it was expensive to make a custom muffler for every type of phone. But the principal!

And in doing so they paved the way for Carterfone, the first electronic device you could connect to the phone network. It was an accoustic coupler, it bolted to the same phone handset in the same fashion as the hush-a-phone, but it had a microphone/speaker and radio transmitter in it. It was kind of like a cell phone. Same sort of story, same sort of lawsuit, same sort precendent set. In 1968 Carterfone won the right to attach this complex widget to the phone system.

But mostly I’m happy the HushMe company has managed to ship all 268 devices to the Kickstarter folks after 3 years. You’ll be looking cool using them on the street, I recommend Aluminum foil hats rather than tin to go with it.

1 Comment on “History of Hush: Fighting the Good Fight Since 1920”