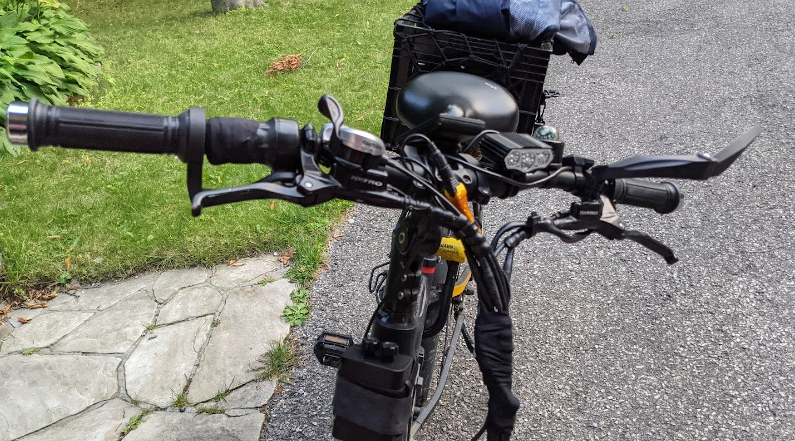 So I can’t believe I’m doing this on the 15th of September. But it was 3 degrees this am and I’m not getting any younger.

So, let’s take a look. Earlier I talked about the heated handlegrips. First we have a problem on the right hand side, the twist throttle is long, and the handlegrip is short. See the image below. Now, I considered removing the throttle, but its a huge safety feature. I don’t use it while moving, but it allows me to get away from a stop faster, so I use it a couple of times each commute. So that is out. So I moved the bell to the left side, shifted the shifter and brake over. I’m not super kean on this, I’ll try it tomorrow am and see. The right-handlegrip of the heated set is designed for a motorcycle, so its expecting a twist throttle underneath it. So, I did what you would expect, I taped them together 🙂

I mounted the 2nd battery pack in front. I considered wedging it in on top of the main battery, it just fits there, but I couldn’t secure it easily. This is out of the way.

I tested the grips out on the bench, the pack can run them for just over 3 hours (the current drops a lot as the voltage sags). I’m a bit nervous, at the 3 hour mark the per cell voltage was 2.4V, it’s not clear where the low-voltage cut-off would hit (or if there is even one). So I stopped the test, but, uh, I hope i don’t forget and leave them on sometime.