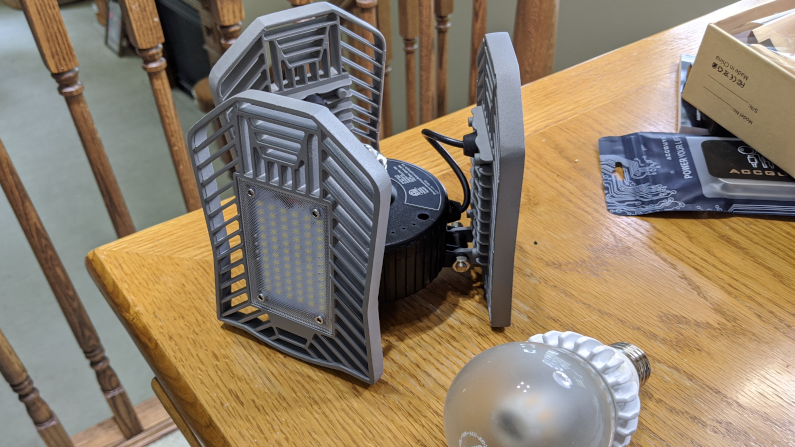 You may recall the great sadness of the lamp that went purple. Its that large white bulb in the photo, a Cree model with a small corn cob inside. I puzzled over this for a bit, what can give me a lot of light, mostly in the outbound (rather than downward) direction (given the type of lamp).

After some research I came up with this folding (deformable!) type lamp. Yes its meant for your garage ceiling. Their slogan is “as easy as screwing in a light bulb” which brought a lot of jokes to mind.

Interestingly, it has no radar. I’m not sure if i should be concerned, but in the end decided that most of my light bulbs also don’t have radar so this was acceptable.

Somewhat more alarmingly the voltage. Usually its the upper that is the range, but both have thae same upper. O well, we are definitely in 85-277 so that should be ok.

The colour. Hmm. I ordered 5000K, its not even an option. But, since its background light (and i doubt they calibrate it too closely) I’ll accept this.

If we look at it installed in its not-particularly-native-environment, we can see its a bit ridiculous looking. But, a large shade hides it. It puts out a fair bit of light, i’m skeptical of the 12000lm specification. But, i’m no longer purple, and that’s what counts.