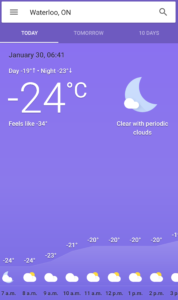 As the temperature drops so does the battery output in an e-bike. And yesterday am we had some reasonable heavy snow on the ground (lightly frozen and somewhat driven over, so really tough to go through). I got stuck a few times. In a car, when you are stuck, your tires spin (and if you are a fool, you let them spin until they make ice and catch fire… I’m looking at you Raleigh!)

On the bike, you just end up stopped. With the spikes on the snow tires they either move you, or don’t spin. Traction far exceeds torque at this temperature.

Now… I think I need some sort of electric blanket for my batteries. I could wrap the frame in some sort of insulating foil I guess. I don’t think it would be a ‘win’ to run an electric heater off the batteries themself (although your car does, for battery conditioning).

Another option would be to get some sort of battery that performs better at low temperature. Or maybe oversize them somewhat and get a heavier torque motor + controller. Hmmm.

Any other suggestions from the peanut gallery? Some sort of flamethrower attachment?

One things for sure, here in sunny crisp waterloo. Its not a cyclists paradise these days!

8 Responses to “Brrr… bikes and batteries. We need more torque!”