So it was dark on the ride in this am. I mean pitch black. Not a huge problem normally since I have a headlight and I keep it aimed reasonably far ahead, and other than a few early-rising ducks there is normally not a lot of ‘pedestrian’ traffic. It was also cold and raining so I was a bit focused on getting to the destination.

Now the city has been doing maintenance on the street by my office. And this involves a lot of heavy equipment and sand. They start early (they are usually there by 6) but they don’t have work lights, just the head-lights of the diggers.

Now I usually just sail over this sand box, give it a twist of throttle and plow through. This am was… a bit different. You see, there was this ramp of sand. Well, you can see some of it left in this photo taken a few hours later, but @ 6am dark o’clock there was no such visibility. I hit that duke’s of hazzard style. While I was sailing through the air (in the dark), for what seemed like about 100 hours, I had plenty of time to wonder… have they closed the trench up?

Well you can also see in the photo what is left of the trench (they filled it in post my escapade). It was about a 3′ drop, which is enough when you can’t see where you are going. And then… a sudden stop at the end where the concrete is. Fortunately wet sticky sand is not that bad to land in, and it slows you down quickly, so I was able to avoid any damage other than my ego.

I’m going to look into bike sonar next. And maybe aim the light a little closer. 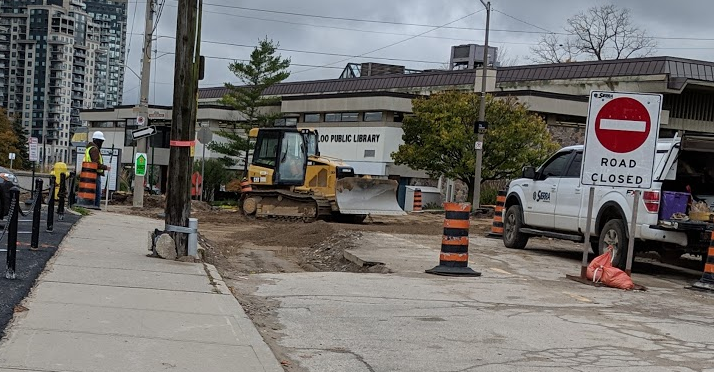