The chautauqua continues next week: meetup on microservices @ Auvik 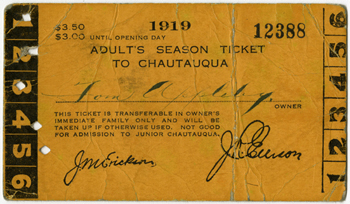 I know you have all finished reading Zen and the Art now (and several of you have finished Lila), so you all understand what a Chautauqua is. We’ve been through a few now, and are starting to ratchet the learning up a little bit with this next one, hosted by our good friends @ Auvik.

Since there was unmet demand to discuss the world of cloud and microservices @ the last one, we’re continuing the topic this tuesday. We’ve got a few short presentations by people who have learned something and wish to share, and ample time to chat and discuss with like-minded folk.

Here’s some info on some historical Canadian Chautauqua, described as “n the late 19th and early 20th centuries, Chautauqua was a phenomenon that brought the world to the door of thousands of ordinary citizens, many in isolated regions. Over the course of a three, four or six day event, audiences were educated, inspired and entertained by a wide variety of accomplished speakers, musicians and actors.”

And, here’s a brochure for a specific one! Back in the day when a 2-digit phone number was a thing (I’ll let lee fill in an appropriate reference to mr burns and what number are you dialing etc).

For the historical one below, the daily program:

Except for that last item I can guarantee we have no overlap in material. So come one, come all. The meetup link is here.