20 years ago: the epic journey 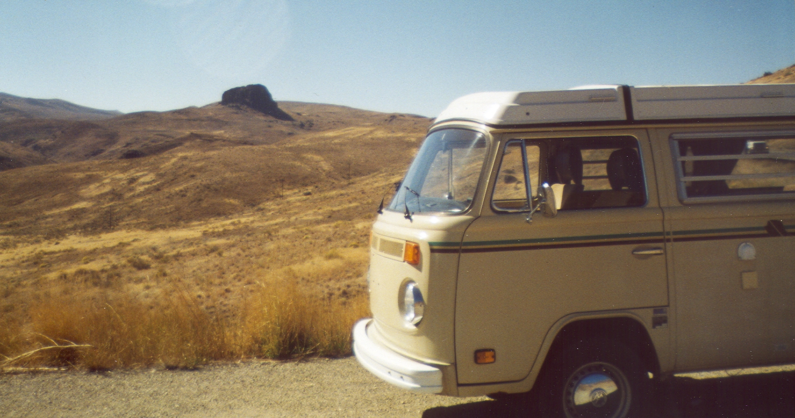 It was 20 years ago now that I embarked on an epic journey. I flew to Sacramento, California, bought a 30’ish year old VW Westfalia campervan, and drove it Prince Edward Island. With no map, no interstate highway, and no GPS.

The telecom bubble was just starting to crack, it had not yet burst. My company, Pixstream, had just entered into a definitive deal to be acquired by Cisco Systems. I was still in my 20’s. What better adventure than a 1-way plane ticket to the west coast, where I would pick up a community news paper (Sacramento Bee IIRC), peruse the want ads, select a candidate, call the person up, hand them some cash, and drive off.

It takes a bit of trust in your fellow humanity to take older untested technology up over the rocky mountains, and through the deserts of nevada. The gas gauge only worked in the top 1/3 of the tank (the wrong 1/3 to work in). There was no heat. Each night I would drive into wherever seemed appropriate, often a US national park. Most of the trip was deserted. I ran out of gas twice, I had some clutch issues on a cold morning in minesota. I goggled at Wisconsin dells. I took the SS Badger over lake michigan.

It seems like only yesterday, and yet it is 2 decades ago. No digital camera, I had a disposable point and shoot, the small number of photos are as blurry as the memories.

I didn’t track the exact route, its something like shown below, i ended up a bit more north than I had expected. There was no Internet, no way to look things up. Just the always present road signs. “This way to wall drugs”, “the worlds largest X”, etc.

It was a pretty long journey, and the only real sound was the music of the air cooled engine, pushing me along, a few sites, the odd tinkering with whatever had broken. It was my own “Zen and the Art of Motorcycle Maintenance”. And i want to do it again. Who’s with me!