Change.org, Apple, Web Push: you can make a (minor) difference 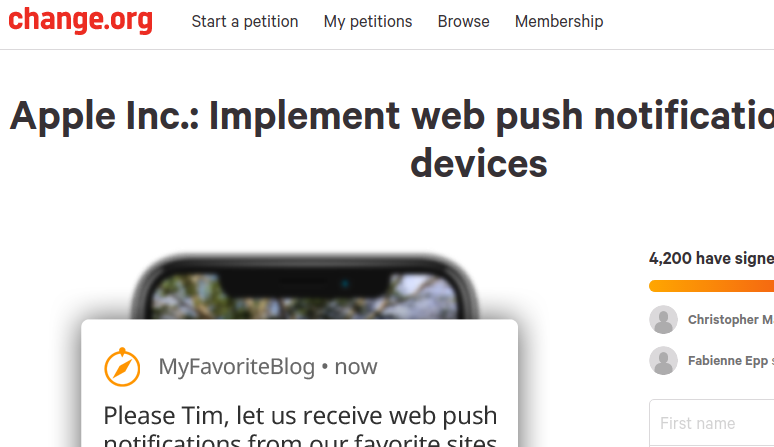 If you check out this petition, on change.org, seeking to have Apple add support for an open standard called Push on iOS.

In a nutshell, Push allows an open web developer to send push notifications to your phone. Imagine being able to make Email as a web application. Or alarm notifications from your Home Assistant. Wouldn’t that be better than the developer being forced to write their software for iTunes and publish through the Apple store?

Now, Apple obviously wants to force all developers to go through the iTunes, since it means they get 30% of the revenue.

But open standards are not necessarily about making Apple richer. Sure, Tim Cook might buy 1 less faberge egg omellete, but, enabling the great unwashed to do great things is a more noble goal.

Now, I have a selfish reason too. We have just launched a fantastic new feature, involving multi-factor-authentication and web push. Its super simple for people to use. Except if they have the misfortune to have an iPhone.

So, change.org. Check it out.