The rite of spring (snow tire removal, not stravinsky) 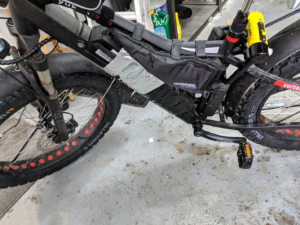 Every year in mid march people start to get antsy. There’s still some snow, but its nearing spring, maybe I should swap my snow tires out.

For those unfortunate enough to live where they don’t understand the concept of snow tires, its simple. When the ground is cold, rubber is harder, and gets less traction. So tires are made with a super-soft compound and marketed as ‘snow’, ‘ice’, ‘snow and ice’ etc. But the upshot is they are softer at lower temperatures, thus getting better traction.

However, these super-soft gumball tires also don’t have a long life. So you want to coax another year out of them by removing them as soon as feasible, and take the chance on ‘one last big snowfall’.

Yesterday I swapped the snow tires off the bike. You may recall they were metal-spiked as well as being soft-compound and very wide. I gotta say, they were fantastic, I’m not sure I would be alive today if it were not for those tires. But, progress, its spring, its time to remove.

Its very weird driving now with nearly 1″ less width and a whole lot less noise. Its not that the summer tires are quiet per se, but compared to the metal spiked monsters they are silent!

How about you, done the great swap yet?

One response to “The rite of spring (snow tire removal, not stravinsky)”