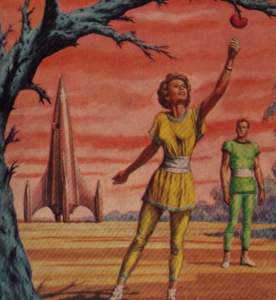 Many years ago there was a great short story “the midas plague“. You can actually read it online at that link.

In a nutshell, advances in productivity and energy and automation meant that more and more things were getting created, and people had less and less hours to work. The economy started to struggle. So the poorer people were forced to work harder to consume. If you were rich you could have a small amount of things, if you were poor you needed a lot. People had to keep feeding the machine as it went into production/consumerism overdrive. Its a classic 50’s sci-fi, totally worth the time to read.

It strikes me that today we are heading down the same path. Not just on the physical production side (GM makes more cars than ever, but employs way less people), but also on the information side.

How many of you have seen or read some content that seemed suspiciously machine-generated click-baitey? Those youtube videos that are a script read by a machine? A breathless title ending in a question mark leads to an article that is a bit… um… lacking.

That is all machine-generated content, designed to vacuum up advertising dollars.

But wait, machines are also now indexing and learning. The Google engine is crawling all of this, as are untold millions of other bots and things.

So we literally have machines creating, and consuming content. Soon only the poor people will read Facebook threads, if you are wealthy enough you can turn the internet off for a bit.