When an electric bike isn’t. Some sort of re-settable fuse? 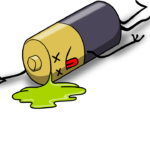 So it was a nice (but cool) day today. After biking last nights high wind, I had put the bike on the charger. So it was all fresh and full and ready to go, and I decided to head out. After about 30km, I turn around to head back. I’m going along about 18km/hr in ‘assist level 1’, which means that effectively the battery/motor is doing nothing other than helping you get started. All of a sudden, boom, the LCD turns off. Huh. Hit the on button, nothing. Stop, take a look. When I hit the button the LCD flicks briefly, but nothing else. The battery – level button directly on the battery pack showed no LED’s. Hmm, we can’t be dead, the range is more like 50-60km, even without pedalling, and I’ve been doing most of the work.

Sigh. OK, bike home. Where you notice it on this behemoth is the intersections, more inclined to do an ‘idaho stop‘ than to full stop and start. And that big security chain doesn’t help hauling it around. Get home, pull the battery, it shows no charge. Plug it in for 1second, and boom, its back, full charge, ready to go. Is it some sort of re-settable fuse?

So this got me to thinking. Nearly everyone in Canada has jumper cables in their car. Its the first thing you bought at Canadian Tire after getting that first ‘winter beater‘. If this is truly a ‘thing’, I was sitting there needing a boost. Battery is 48V @ 16AH, so the charger is 52V. A few good samaritan’s stopped as I was fidgeting w/ the battery on the trail, for sure if battery cables for bikes becomes a thing they would have had them and offered me a jump. Is this going to become a thing?

Also, to the little kid today who stared in bug-eyed wonder @ my big tires thundering towards him and said “Oh my gosh that’s a big bike”, tell your dad you want a fatty for christmas, he’ll know what to do.