Tales from the road: the longest daytrip with the zebra 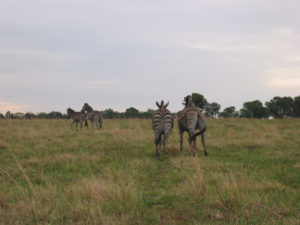 Flew from Toronto to London (well, Heathrow airport hotel), land in the early am, head over, participate in the regional sales conference for the day, head back to airport later in the evening for the flight to Johannesburg, land early morning, very groggy and disoriented. Why so bad? Well, in addition to the back-to-back redeye (which is about to get the trifecta), I did something stupid.

I know, hard to believe. But… There’s a great site called ‘seatguru‘. You go on there, find your airline and flight, and it ranks the seat quality. I’ve done this, but then, in a fit of stupidity, I’ve overridden its judgement. I know better, the seat I have chosen is an aisle seat in the 3rd cabin, it has nothing in front of it. Much better, stupid web site.

Except. Its not. There’s nothing in front of it so people step on your foot and bang your knee all night long as they use the lavatory which is right there.

And its worse. My seat mate was the most talkative and least interesting person ever (present company excluded of course). He was a mid-tier manager for the water-treatment authority for the thames river value. All night long was trivia about flow, sewage, usage, etc. OMG. So dull and yet not enough to sleep through.

I land in Jo-berg.  Here I take a taxi (the train is not yet operational) to Pretoria and go straight into a day-long seminar that I am giving. Its in a large room, stadium style, I’m at the front. The audience is more than I had expected. They also stare silently at me as I huff and puff through things. At tea-break I ask my host, what’s wrong, am I bombing this? No one is asking questions or even shuffling in their seats. O no he says, that would be considered rude. OK, back in, talk to the painting for the afternoon. Evening comes, we break about 5. My host takes me to dinner somewhere, I sample biltong. Its dried antelope (probably the same bits they would put in a hot-dog). He then offers to drive me back to the airport to skip the taxi. Great!

Enroute, he says, first trip to Pretoria? Its my first trip to Africa entirely I say. Oh… Hmmm… What can he show me enroute the airport? Turns out there is a game park sort of nearby. We detour through there. I see some zebra and some rhino and some big birds. We then head to the airport and I return to the air, back to London, then back to Toronto.

PS, I always listened to seat guru after that.