Tales from the road: homesick in china? We’ll fix that for you! 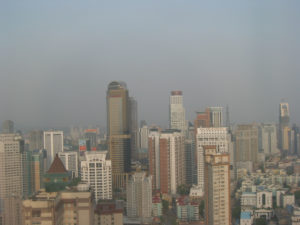 My first trip to china was in ~2006. I was there for many weeks visiting the same company. Every day I would arrive, we’d go through some more of how things worked, how we could integrate our products.

Their team didn’t speak much English, an interpreter was assigned. But she was also to become an exchange between how different China was. Each day had a bit of the same pattern. We’d meet, I would whiteboard things, present powerpoint, they would pepper me with questions. Around 12 the ‘leader’ would go to reception and get some cash from a petty-cash box. Forms would be filled. We would then go to lunch, each day somewhere different. On the first day, we came back, and the interpreter explained to me that they would all go and have a nap, I could stay in the meeting room. I’m like, sure, go check your e-mail or whatever, you don’t need to lie to me about having a nap. She’s like, no, really, we get tired after lunch, so we sleep at our desks on the floor. Later I look this up, its true.

Each day at ~5pm I am dismissed, I go back to my hotel and then wander the streets. China is dirty, there are few cars, people ride bikes. The streets are a bit eerie, they are quiet, no one talks. I go into various convenience stores and sample the various iced-teas or tea eggs.

One day for lunch we go to this place and we are served a (communal) bowl of tiny shrimp, all still in their shells. Everyone else can pop them in their mouth and spit out the shell/legs/head/feelers. I pick at a few, I missed this class in public-school-etiquette. I feign that I am full, I’ve ingested about 10micrograms of shrimp (and 1000x that in shell).

Some days we go to a place where I am taken to the kitchen and asked to point at what I want (literally the thing, e.g. that fish). I don’t recommend this, being inside a Chinese restaurant kitchen and then eating what comes out of it, its …. some things are best left unseen.

One day we go to a place and a dish is brought out… drunk-fly. The waiter comes out with a bowl with another bowl upside-down overtop. With great ceremony it is placed on the table. The waiter goes to remove the top bowl, flies start to escape. The bowl is replaced. A bottle of some vile liquor is produced. The waiter quickly dumps a bit in the bowl, replacing the lid. After a few minutes, the top is removed, and a bunch of woozy-looking flies are wandering slowly. We eat. Well, we except me. I draw the line at something that hatched from an egg into a maggot in the kitchen.

Dinners are tough. I’m alone. I’ve learned not to go in the kitchen and point. I can’t read the menu. So I order by price (seems like this place should cost about 50RMB for dinner, so, um, lets order something that is about 20RMB, a couple of 10’s and a 5). I end up one day with the local specialty (nanjing squished duck). Its effectively a duck that has been run over by a truck, bones and all, served cold and preserved. Its not bad but a bit sharp.

After days of this and various post-lunch/pre-nap discussions w/ the interpreter where we re-calibrated things (she was astonished people had homes our size, and that they had kitchens in them), one evening she takes me to a night market and explains the local delicacy is ‘stinky tofu’. We get some, it comes in the type of cup your dentist gives you to spit in. It smells bad, very very bad. I try it, it can’t taste as bad as it smells right? its worse. I note there are no sinks or washing facilities in the street food vendors. The interpreter declines to try the stinky tofu. She won’t eat that she explains, its not clean. Thanks.

After many days, some weekends, etc., they decide one day I must be homesick. For lunch we go to ‘western restaurant’. In the same way we consider there to be one type of chinese food, they too feel there is 1 type of western food. The place is…. weird. Its a 50’s neon+chrome style diner, with “western-style-self-help-buffet” (aka salad bar). I recognise nothing on it. We then order the main, the leader orders a t-bone steak. Steak is very rare in china, very expensive. It comes, it is about 3mm thick, one side is incinerated, the other side is raw. A raw egg is cracked on it. He has never used a knife-and-fork, so he picks it up with chopsticks and gnaws on it. It has the texture of a shoe-sole. I have never felt so far away from home. I cannot even begin to explain how different this place is than a typical steak joint. I feign excitement and thank them, and suggest that I’m ok w/ the ‘chinese-style’ food. We never speak of it again.

When its time to leave, last day. My flight is early afternoon. I am excited to sleep in. Sadly my flight is *brought up* by ~4 hours. Who knew that was a thing? My assistant calls many hotels trying to figure out which one I’m in, finally reaching me. “You have to go to the airport right now!”. I slam a few things in my bag and bolt, getting in the taxi. The taxi driver says something. I say “airport” and mime flapping my arms like wings. After a bit he looks enlightened. We leave. Then he says something that I interpret as “which airport!”. I panic. Is there 2? I look confused. He repeats urgently. Eventually he gives up, and we end up at a place that has planes. I leave.

One response to “Tales from the road: homesick in china? We’ll fix that for you!”