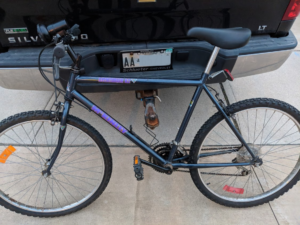 You remember that really great movie, the one that tied it all up perfectly and you said, well, they should never make a sequel? E.g. no-one would do Schindler’s list: the sequel.

Well, tonight I bought a new bike to replace the stolen one. I paid … are you ready for this… less than 1% of what I paid for the last bike. In fact, considerably less. This one clocked in @ $10, close to 0.6% of the original’s price.

For my $10 I got a McKinley Adventurier A2. Made in Canada, not exactly sure when. Its got 21 speeds, and everything was a bit seized or leaky or both.

Some scrubbing, unseize the ~8 chain links that were seized, some machine oil liberally applied (never WD40!) where needed. Adjust and unseize the front brakes. Some air, a patch, we are good.

Now, it has a bit of a penchant to ‘hunt’ for gears, like that automatic you used to have w/ the loose bands, you know the one. It came with a light, fully of very crusty leaked batteries. I replaced them, but it gives off one-birthday-candlepower, (those old incandescent bulbs were terrible, its not even one of the halogen ones you put in a old-school maglite). And the brakes, well, they strongly suggest the bike stop more so than command it. The tires are a bit cracked and worn.

Is it great? no. as sequel’s go, it is as disappointing as CaddyShack 2 or Blues Brothers 2000. Maybe more. Is it crocodile dundee in los angeles bad? maybe staying alive bad? Not really. Certainly not Jaw 2 bad. But, well, the previous bike was just so great. And this one is so mediocre.

O well, at least I don’t have to walk to work tomorrow. No word on whether it makes it all the way there, or lasts the day. Maybe we can do a sting and see if we can get it stolen?