Tales from the road: the (non hello-kitty) Shinkansen 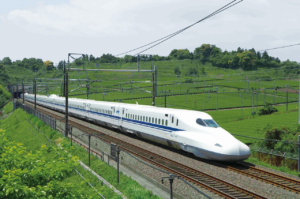 Japan. Famous for many things including high-speed-rail and many, many things that are very specific to Japan and confound foreigners.

So, I arrive in Tokyo a few years ago for an IETF event that will be held in Hiroshima. The general way to get there is you land @ Narita, you take the (Narita Express) train into town (Shinagawa), switch over to the Shinkansen, and head on your journey. I arrive, bleary eyed and jet-lagged. I take the first step without trouble (having done this before). I get to Shinagawa, snoop around for a bit and spot the Shinkansen ticket machines, head over.

Side note: In Japan there are many different train companies. And they each run their own tickets and infrastructure. So be prepared to be confused by just that bit.

I get my ticket. It comes as 3 credit-card sized printed things. No problem. I get to the turnstile, I place the first card in. It politely declines, hands it back. So I try the second. Then the third. Hmm. Maybe flip them? So I flip them over, and repeat. No dice. Clearly I am doing this wrong. Repeat. No dice. Then a nice gentleman in white gloves (side note: white gloves are common in Japan) comes over. He takes my 3 cards, aligns them very carefully, and puts all 3 at once into the machine, which then hands back 2. Stupified I thank him and continue on my way. I would have been there a long time before I considered the machine wanted all the tickets and would choose of its own accord which I got back. Huh.

I then made the 2nd blunder. You see, that train ride is reasonably long. From research I knew it had WiFi (and by research I mean there were signs in Japanese on the station platform w/ the English word WiFi on them). I jump on the train, we pull out (on time of course). I then open my laptop and… the WiFi is WEP encoded. Huh. What could be the password? I hunt around the carriage. There is a sign at the front about WiFi, but its in Japanese too.

My distress is somewhat obvious, another person (no white gloves) tells me that I needed to buy the WiFi in the station. What? I mean, this is the point I want to use it, I’m willing to pay, but I had to do that before I got on? Opportunity wasted. So I stare out the window at the blur of the countryside until we arrive at the Hiroshima station, stewing about who would consider making WiFi without some simple captive-portal visa-collector scheme.

Side note. The hotel was attached to the station. And the room, well, lets just say i’ve been in shower stalls in RV’s that were bigger! But it had a very nice buckwheat pillow.

Another side note. The best ham and cheese baguette of my life was acquired in Shinagawa station on return, some sort of imitation french village was setup there. It was fantastic. Sorry France.