Tales from the road: the pantless seat-mate 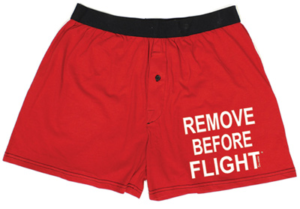 This happened a couple of years ago, and I thought I would share it with the crowd.

I’m on a flight (British Midland, BMI) from Amsterdam to London. I have an aisle seat nearish the back of the plane. For those who haven’t flown this route, its usually full of hungover British lads on their way back from a stag. The only redeeming feature of BMI was the ridiculous retro hats the flight attendants hat to wear, but I digress.

So I go to my seat, slip the bag in the bin, and I’ve  just sat down when the next guy down the aisle indicates he will be sitting beside me, in the middle seat. No problem, I make to stand up, he indicates to wait a second, during which he removes his pants, folds them, places them in the overhead bin, and then sits down beside me, pantless.

(For those from the UK, I am using pants in the normal sense of the word, not your ridiculous underwear sense… he was wearing boxers after the de-pantsing).

Huh. What does one say? I guess sure I’ll sit with this total under-wear-wearing stranger, leg-to-leg, for the next hour, because that is a totally normal thing.

Was it a beautiful pair of saville row slacks that were lovingly folded to the overhead? No. This was your dreadlocks wearing pants around the ankles type guy, his pants were half off when he started the removal process.

One response to “Tales from the road: the pantless seat-mate”