History in photos: my new office 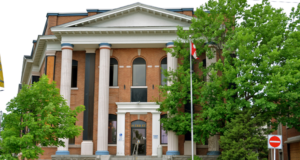 So I’ve been schlepping a new business off the ground. And this time I’m taking a more incremental approach (cuz I’m a lot older and have less energy!). One of the strategies I’ve taken is to work in a ‘coworking’ space. And I’ve chosen one of the premier ones in our region, the Communitech Data Hub.

This is a bit of a heritage building in town, originally built in 1880 as Mutual Life’s building. They moved out in 1912, creating a great new building. But, we have some old photos of the one I’m in as memories.

How about this sketch from 1880? Before they put the extension on. Over the years the building housed Mutual Life (now sunlife), many other insurance companies, and then the Waterloo regional police from 1991.

After the policy moved out, the building sat empty for a bit until cockroaches like me moved in 🙂 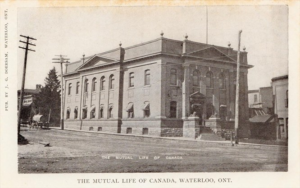 How about this great photo from 1905, just after the extension. Prosperity ahead!

Molson’s bank shared the building in the early days, giving us some great ‘vaults’ (until they moved across the street to where BMO is now).

I don’t know about you, but I find looking at these older photos a bit addicting. This link (from the Waterloo Public Library) has another great ~1912 photo:

Its doubtful I will make the same history as these folks, but, to dream. When these buildings where built at the tail-end of the Victorian era, people invested cash for a long-term return. Today, people would lease paper if they could. Its a different world. 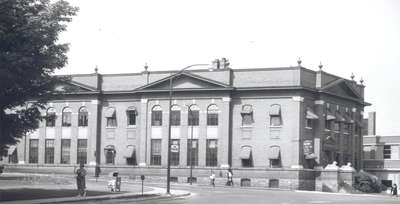 4 Responses to “History in photos: my new office”