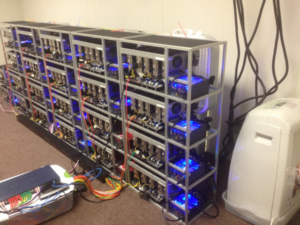 Bitcoin. powered by coal, it uses more power than Ireland, and now it is interfering with the mobile network, first responders, and endangering lives.

How so? Well, the rigs that people are building en-masse look like this. Notice any RF shielding? Nope. And, its a lot of high-speed electronics with a lot of wiring. This image looks not too bad, but realise that people are putting tens of thousands of these together. And sometimes they don’t take as much care, see the next photo.

All that RF noise is interfering with legitimate radio uses (Television, mobile phones, WiFi, you name it). 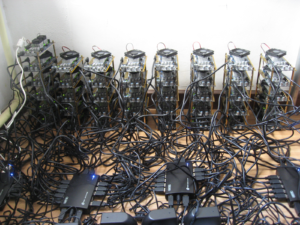 And when the spectrum is licensed, the regulator can come calling. As the FCC did in this case. Their letter alleges that this individual caused interference with the T-Mobile 700MHz network in New York City. And the 700MHz band is where your first responders are working, both in Canada, and the US. (Note the interference by these things would be fairly broad-based, so more than just 700MHz will be impacted).

And its causing big problems. First, these setups are catching fire, in residential multi-dwelling units, this is unsafe. Similar to grow-ups, people are stealing power, tapping into the grid (which was ultimately the cause of this fire). 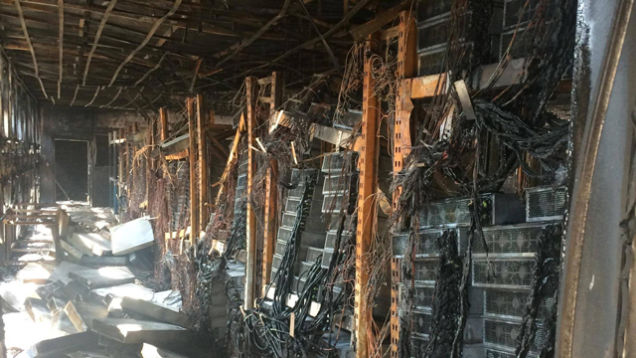 But also, if the RF noise is interfering with the underlying communications network, lives could be at risk. We are not talking about a couple of bad splices in your home-cable-rg59-wiring, nor about one or two PC’s you might run with the lid off. We are talking industrial scale, often mega-watt powered, wiring rats nests operating in the microwave range.

Its not a few hobbyists using an idle GPU that will cause this problem, its those doing it at scale. Anyone who has a ‘room’ for their mining, or a converted garage/shed, open-rack machines full of GPU’s.

So, if you know a friend who is dabbling, maybe get them to read the FCC letter, and get some shielding (and maybe an electrical/fire safety inspection). Before someone gets hurt.