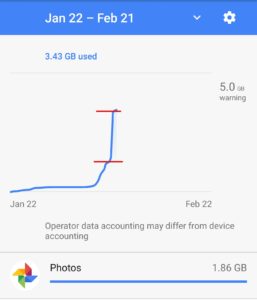 OK so I spent a day watching a rocket launch this week. And I took a lot of pictures on a mobile device. And I was roaming. So, am I going to be bankrupt? What will happen?

First, how well did it work. In short, not very. Although I had full signal strength on LTE+, and the downstream (download) seemed ok. the upstream (upload) just got nothing through. It would retransmit again and again, timeout, retry, etc.

So, do i get charged for this? You betcha! Lets look at my graph. The nearly vertical line in bandwidth usage (which I showed the red start/end of) is the ~10 hour period I was @ Kennedy Space Centre. It tried to upload 1.86GB of data (and succeeded on about 5 pictures or about 30MB). So the efficiency was ~0%.

What happens? Well, the mobile network is allocating time slots for upstream to the various users. And there are not enough. So my app (Google Photos) is using HTTP(s) to POST these images to a server. And, since there is not enough upstream, it times out and tries again. And again. In doing so, its actually making things worse. It sends the first bit of a file, fails to get acknowledgement, so it sends it again. This uses 2x the timeslots/bandwidth, which then takes that away from someone else, that happens to them, and the whole thing goes into congestive collapse.

So my phone, which is capable of Cat 15 (800Mbps) of LTE+, gets nothing through, and tries infinitely hard. Its goodput is near zero. So everyone loses. The capacity is consumed, I pay, I get no experience for it, and other users lose this opportunity.

There are some queuing algorithms (e.g. see CoDel) which try to resolve this. There are also some transports (e.g. LEDBAT) which seek to solve this issue.

Note that its probable here that the congestion was based on the number of stations more so than the bandwidth they are using.

pps ammended w/ the usage link from the carrier. I cannot make head nor tail of the timeline tho.