In 2000 I attended a football game @ Penn State. ~100K people attended. And, cellular coverage (it was EDGE) was non-existent. That many people crammed together, and it was nothing but interference, nothing got through (not that it would have mattered on the phone I had at the time). So we all focused on the tailgate, the game, cornhole, the usual.

This past weekend I attended another football game (Tuscaloosa Alabama). ~100K people attended. And cellular coverage (LTE) worked!. First, lets try some (slightly blurrcam) video of the game, that I took and it uploaded automatically. It gives u an idea of the atmosphere!

Now, cellular coverage at high density is very difficult. The bandwidth is not the only issue. There is interference galore. No matter how much you aim no matter how many small cells, the phones chirp back towards them (and create a near/far problem). Even the shape of the stadium makes it tough (no towers overhead or in the middle).

But it works. And, of course, ‘bama won. And, amazingly, Tennessee brought their entire band (~400 people). So the ‘Million Dollar Band‘ played off against the ‘Pride of the Southland Band‘, the better part of 1000 instruments wandering a field. You don’t see that everyday.

So I don’t know what i was amazed at. 17 years of progress and 100K people can tweet HD photos live, ~1K people in band formation. Or the fact the score was as low as it was. Hmm.

And now (I didn’t take this photo), the photo of the game. Its like a modern day normal rockwell painting! It gets better the longer you look at it! (yes he got a misconduct penalty). 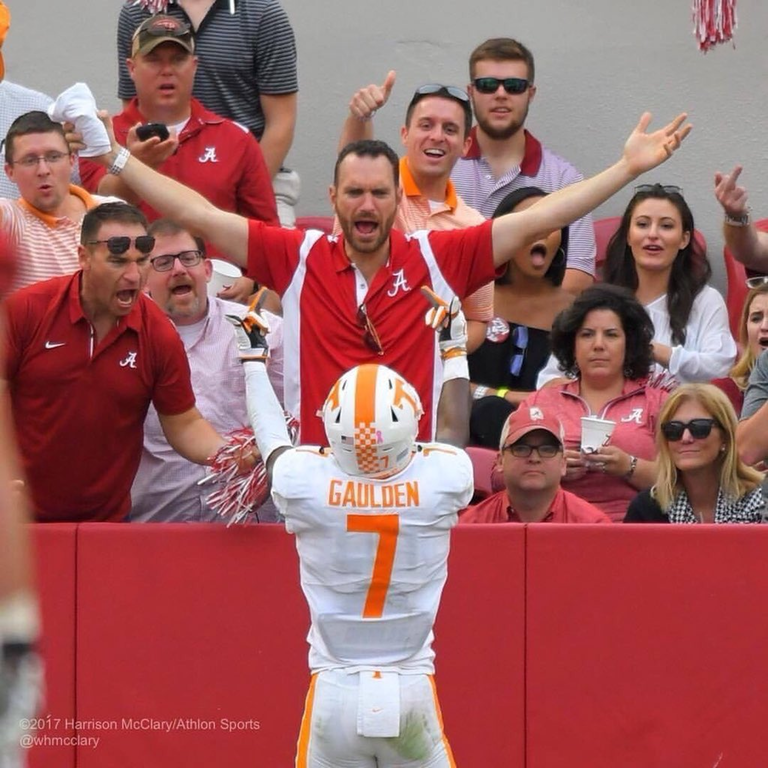