The curious case of the Vorke Z1, Plex, and the status bar 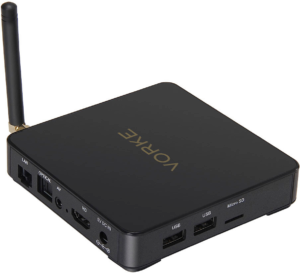 My living room TV is driven by a Vorke Z1, (and an ExpressVU Satellite box, and a Chromecast, and, … but this story is about the Vorke).

The Vorke runs Android (7.1.2) and Plex, and connects to the basement NAS (which runs the Plex server). And it has worked pretty well for the last 9 months or so, its fast, integrated easily w/ the harmony remote, and just works.

Well, no more. I got home Saturday night and the user interface of Plex is all ‘new’, news, etc. Huh. But, more interestingly, there is now the Android status bar on top of it all. And, since the TV is plasma, that is burn-in material (as well as an OCD OSD distraction!).

Interestingly in the settings there is no longer “TV Mode” versus “Tablet Mode”. It just ‘knows’. OK, i can fix this right? Well, it was trickier than I thought. See, the Vorke, unlike the rest of the stuff inhabiting my house, had not been rooted. OK, time to fix that. Oh, erg, ack, the image is a u-boot bootable OR you put twrp on a sd-card and go. Well, lets do the latter. OK, shortly after that I am staring at my new brick. Hmmm. Why no love?

OK, well, lets sort out how to unbrick this. The screen just says Vorke, it has only 1 button, so try that various ways (before power, during power, after power), but no recovery greats me. OK, time to roll up sleeves. a bootable u-boot sdcard, how hard can that be to make in Linux?

Well, not very. There’s some windows program that floats around the russian 4pda site, but i’m not over keen on that. So what if we extract the u-boot from the image file and then dd it to the sd-card? First, lets unpack the img file. A little google-fu led me here. And then I installed ‘android-libsparse-dev’. And then added -I/usr/include/android. And then I had a binary. (This code works too).

I then put the sdcard in, held the reset switch as i applied power, waited about 3 seconds, and it started to upgrade, and it worked!

(and of course I picked a rooted img, but you can easily put it in there yourself).

Once complete, I’m unbricked. I then pick one of the (fairly crappy) apps from the play store that get rid of the status bar on a rooted system, and I’m good to go.