On my flight from Beijing to Nanjing in china the other day there was an interesting advertisement on all the seat backs (at least, i think it was an advertisement).

The ad suggests that “derby the world in my finger”. I’m not 100% clear on why i might want to derby the world inside my finger, but I’m sure its a good thing. It seems <a href=”http://talesfromthebigtomato.blogspot.com/2009/11/derby-huh.html”>others </a>have <a href=”http://batteredleatherjournal.wordpress.com/2010/04/04/butchered-english/”>also </a>wondered in vain. 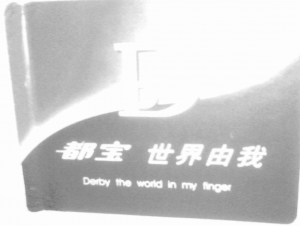