Recently an Aucma Stand Mixer entered the fleet of gadgetry. No Internet connectivity, so you are probably not clear on where I’m going with this, but… hack on!

You see, the Acuma stand mixer (like others) has a bit of a problem with Dough climbing up the kneeding hook. Drop a bunch of flour, some yeast, salt, a bit of water in a bowl, hit the go button, and after about 10 minutes the dough is wandering up around the top enroute to the door.

This must have a simple solution involing 3D printing, right? Well, a few lines of OpenSCAD and it does look like it. Open up the micrometer, measure up the dough hook, come up with this script:

and we get a shield that looks like below.

The Tale Of Overestimating The Competition 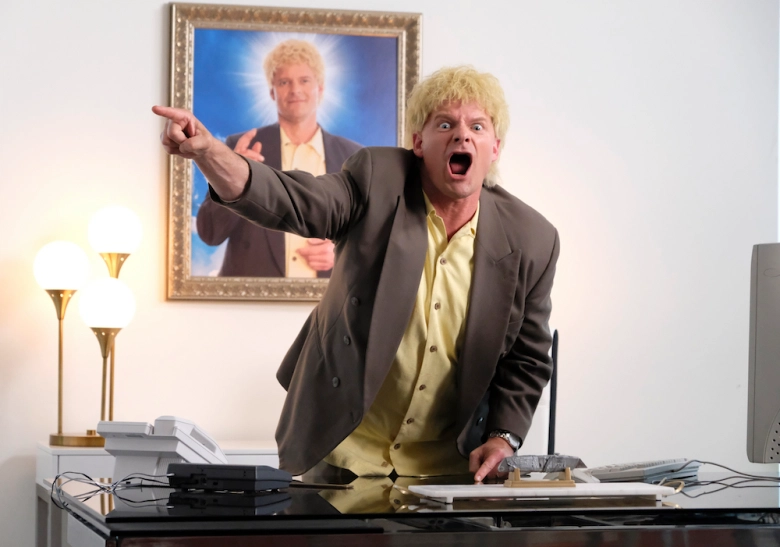 About 20 years ago my company was acquired by Cisco Systems. For reasons involving accounting and telecom bubbles, Cisco closed us down about 4 months later, writing off > $500M in investment. This is the story of how I spent the time trying to make the customers whole, and of assumptions destroyed.

In late ’96 I left Hewlett-Packard. The new company, PixStream, spent some time trying to find its way without funding. When we did take on money, it was initially a smallish amount. We created a new market (video over DSL) in the early early days of broadband, recognising that phone companies would want to compete with cable companies with content. Things were looking up.

Like many new spaces there were different approaches being tried. They ranged from outright fraud (Pixelon) through similar companies with similar approaches, through to established companies. In our case the latter was Tektronix (Danaher). Tektronix was a company I had known through my time at HP where they were the feared competitor. Tektronix was a (much) bigger company than our small scrappy startup, and we were motivated by the fear of their resources and reach.

Since we were creating the space, there was no blueprint for what features people wanted. We either invented them, or, jointly developed with our customers. This time predates Google and StackOverflow, there was no copying/fast-follower approach obvious. Discuss, Build, Try, repeat. All with a nervous eye over our shoulders. We didn’t have much data on our competitor(s), but it was reasonable (to us) to assume that Tektronix was investing more and pulling away from us.

Fast forward a bit. Cisco arrives, they are late to this new space. We are bought. A few months elapse. Cisco has what they assume is 1 bad quarter (Q1 2001). They panic make some hard decisions. We get a phone call. Fire your whole team, and then you can spend the next 4 months helping those customers move to a competitive technology. Ugh.

I had put a lot on the line with those customers. We were partners. We had built stuff together. Many late nights were spent in uncomfortable Central offices. One of those central offices had a single chair which I’m reasonable certain had fleas. So itchy. So, I bravely entered the breach.

The instructions from Cisco were simple. Find the material gaps, find a competitive technology, convince the customers its ok, Cisco will pay. If there is a material gap, you can help the competitor fill it, but you can’t give them the source code (since we’ve declared that valueless).

One of the key customers is using a feature I have invented. Its not too complex, we take a weirdly encoded ASCII stream that has the currently playing artist/song name, and, render that statically into MPEG video, muxing it in with the audio. This allows their music service to work on any set top box. The customer digs in their heels, this is a requirement of their contract with their music supplier, it must work.

OK, no problem. I fly to Oregon to meet with Tektronix. I am assuming I will be meeting with hundreds of people with millions of $, this should be a piece of cake. I’ll whiteboard out the requirement, which is super obvious and simple, they will flick their fingers, a few engineers will code it. Since Cisco is paying the bill, its already sold, how can this go wrong?

I arrive in Oregon. I drive to the office. Its a small team. Much smaller than ours. They have few resources, they are strained. I explain the problem. They look at me blankly. They know they cannot get this done. I whiteboard it some more, seeking to explain the simplicity. We did many streams of this on a MIPS R5000 processor, its not CPU intensive. It was not overly hard to code up front, it should be easier for them knowing the minimum viable bits. They have a million reasons why they cannot get this done.

I now realise a valuable lesson. There is no single “Tektronix” we are competing against. These people are competing twofold: 1 for mind-share in a much-larger (and oscilloscope-focusd) company, and, 2, against us. We are 100% focused on the problem domain, we have been pulling away from them since before they started. The huge competitor with infinite resources is a paper tiger.

I accept their offer of a T-Shirt, and wear it home. I explain to the customer that its not obvious to me Tek can get this done. I explain to Cisco the same. Later I understand they discussed it in a more legal setting with some outcomes.

The morale of the story, don’t overestimate Goliath when you are David, its causes you to not get started.

PS, if you want to learn more of the Pixelon fraud, that is also a fantastic story. Wired covered it, as did National Geographic. Its fantastic, they stole the investors cash, built nothing, and hired The Who to play their closing party. My story is not as fun as that, but, well, I was focused on building value.

PPS, the T-Shirt is no longer with me, nothing left but the memories of those sad people staring at me in Oregon as I explained how to be successful, and they couldn’t. 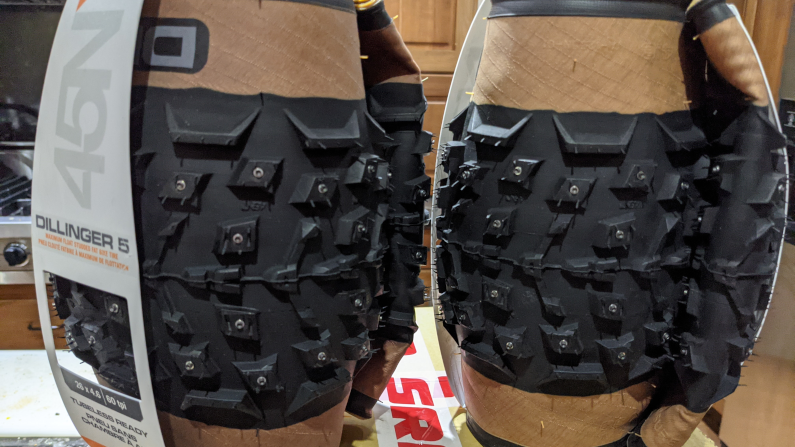 Now why the tan-sidewall you ask? Blackwalls, whitewalls, those are you traditional walls. (side note: if you are now humming Wonderwall by Oasis, you are welcome). Well, its a case of beggars XOR choosers. You take what you get when you order half way through the season of Covid.

Am I excited to install winter tires again in the same season? No. Also, the new bike, the tires on it are *@#$ tight, I managed to break the bead but the tube seems to be bonded to the tire somehow and I can’t break it free of the tape. So, I’m going to declare defeat and see if the bike shop can finish the last bit.

As for the flame thrower anti-theft device, we are still working on that. Perhaps I will just hire a junkyard dog.

The Delicious Smell of Burning Fingers 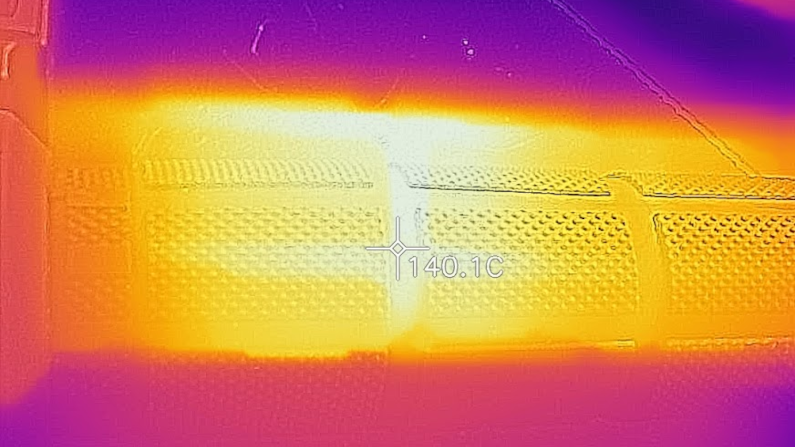 Yesterday I completed the power pack for the handle grips. Today I gave it a bit of a bench test. One of my assertions in the design was that I did not need the 12V buck converter, that the ~11V – ~15.5V output of the 4S battery post BMS was sufficiently close to the 12V Lead Acid + Alternator these were designed for (which would normally have a charging voltage of about 13.8V).

Lets see, let them run for half hour, whip out the FLIR. Hmm. 140C. That’s normal for your hands, right?

Now, the handlegrips have a 3-position switch (OFF/LOW/HIGH). I suspect that the High puts 2 coils in parallel, and Low puts them in series. But I’m not sure, it might be just 1 coil versus 2 coils.

OK, so its more or less inline with what I was thinking. Once these are installed on steel handlebars there is a lot of heat sinking, that loss plus the colder outdoor plus the wind will probably drop these to 60C or so, and, with my gloves on, no burning. Or so I predict.

What do you think?